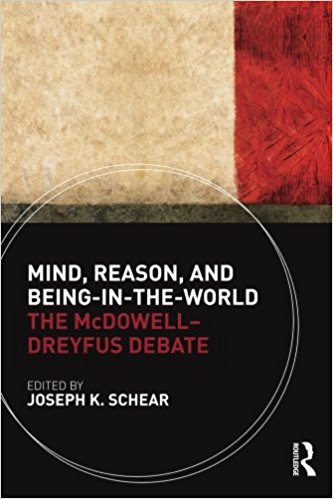 In my last post on Hubert Dreyfus and the intentional arc, I ended with a question about the relationship between intuitive responses to environmental solicitations in expert action. In this post, I continue to explore the structure of intuitive response through the work of John McDowell.

It is precisely on the status of intuition in perception where I find Dreyfus’s account wanting, and where I think McDowell gets it right. It seems that Dreyfus takes everything traditionally attributed to concepts and conceptual ability and repositions these skills as available to an agent at the ground floor of perceptual experience through nonconceptual motor understanding. But what sense does it make, for instance, to speak, as Dreyfus does,[1] not only of perceptual knowledge but also of nonconceptual beliefs about perceptual objects and the solicitations, affordances, and constraints that issue from my engagement with them? The appeal to solicitations (or to what an object obliges of me), to affordances (or to what an object may aid me in doing), and to constraints (or to what an object may prevent me from doing), seems squarely in the domain of a cognitive and inferential space, in other words, a space shot through with a conceptual understanding that interleaves my every practical action. Indeed, this is precisely the stance that McDowell takes against Dreyfus.

However, in arguing for a conceptual dimension to perception and action, McDowell is not promoting the kind of detached and deliberate monitoring that Dreyfus rightly notes often interferes with everyday practical performance. In McDowell’s own words, “We should not pretend to find a detached self in all our experiencing and acting.”[2] This view, alleges McDowell, falls prey to its own myth, the Myth of the Mind as Detached. In this sense, to take a minded view of action and perception does not suggest that conceptuality is equivalent to detached monitoring or to an explicitly contemplative orientation to everyday behaviors.[3] Instead, what McDowell suggests in saying that perception is conceptual through and through is that mindedness is itself an absorbed and pervasive feature of the body’s intelligent engagement with the world. It is not, as Dreyfus construes it, a verbalized and propositional reconstruction of a prior experience of engagement that was itself nonconceptual, where its perceived propositional features arose only post hoc in descriptive reconstruction. As McDowell notes, “We should not suppose conceptual capacities come into play, in connection with empirical knowledge, only downstream from experience.”[4]

In other words, on McDowell’s view, conceptual capacities are not actualized by taking a step back from and evaluating things from a distance; concepts are in fact ingredient in the bringing to presence of the objects in our perceptual cognition in the first place. However, it is important to note here that saying perception is shot through with conceptuality is not the same as saying that things have been perceived or understood correctly, or even optimally. The point is more humbly that action is guided—consciously or not, correctly or not—by reasons for doing things, reasons that are grounded in our nonreflexive understanding that a situation is a certain way, and that we should respond—again, consciously or not, correctly or not—in a manner appropriate to our abilities, coupled with our understanding of a situation.

Nevertheless, Dreyfus is surely right that the Myth of the Mental, which incorrectly sees action as the execution from a distance of rational and deliberate reasons for behavior, needs to be replaced with an alternative account of perception, action, and cognition. At the same time, this account must be explicit about how it is that the intuitive responses to environmental solicitations that Dreyfus sees as key to practical action come to be what they are. In other words, how is that “external forces” show up for something that is not self-conscious awareness but is still capable of semantic recognition and skilled response to meaningful solicitation?[5] One answer is to follow McDowell in seeing the conceptual as co-arising with perception. However, in seeing the conceptual as basic to perception, one need not assume a definition of concepts that requires explicit propositions, declarative speech, or conscious rule following.

[5] Do nonreflexive phenomena show up for a “someone,” at this basic level? This is not clear.