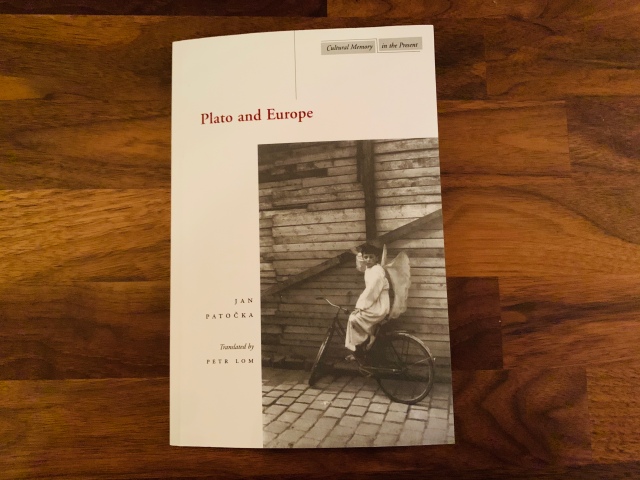 In the lectures published as Plato and Europe, Jon Patočka (1907–1977) asks a series of questions: What does the soul mean? What is its significance? and What does it mean to care for it? These questions Patočka says are central to the heritage of Europe’s spiritual identity. To answer them, he will appeal to readings of Greek myth, Plato, Democritus, and Aristotle, but more fundamentally these questions are approached in the mode of phenomenology, principally stemming from a unique reading of Husserl, and to an extent Heidegger. I won’t recount Patočka’s historical exegesis here, as my concern is with the phenomenological account he gives, and with how this understanding relates to the role of askēsis, or spiritual exercise, in the formation of perception. To this end, I will summarize Patočka’s phenomenology, paying attention to the role care of the soul plays within it, before making my own connections with askēsis.

Patočka’s phenomenology starts with an interpretation of Husserl’s Ideas for a Pure Phenomenology, and specifically with phenomenological reduction, or conversion, as he puts it, that is, the conversion of things into phenomena, into the appearances we encounter in perception. That things are, says Patočka, is only one aspect of a situation wherein things also show themselves. What does this mean? It means that to be a thing means also to be a thing that manifests or shows itself in experience. Patočka wants to thematize this capacity for showing, appearing, or manifesting (he uses all three terms) as an intrinsic aspect of things in themselves. Things are, and through their being they show themselves. On Patočka’s own admission­ this is an obvious and uninteresting insight, but it leads to the later questions, What is the relation between a thing and its appearance? Where does appearing occur? What is the place in which appearances become manifest?

We’ll get to what all of this has to do with care of the soul in a moment, but already we can see the arc of Patočka’s reasoning unfold. He is not asking questions about existing things per se, nor about how things appear to us, but about the nature of appearing itself. We accept, for example, that when a phenomenon appears to us—a flower, a cloud, an apple—that it does so cast from a certain perspective, which illuminates specific aspects of the thing in question. Perception is given in terms of sides, surfaces, depths, fronts, backs, light, shadow, angle, and so on, and yet we are also aware that there is an absence present in our experience. We can’t see it directly, but we know that the book in front of us has an occluded underside, that part of the tree we admire faces away from us, that the coffee cup cannot be viewed from all sides at once. Is this a deep insight? No. Patočka even calls it a “large triviality” (19), one we all more or less understand.

We may not put the insight into words, but we tacitly assume something like it is the case as we navigate space and time. Patočka moves us through this description of “absolute banalities” because it is here he says that “within them is the hidden secret of appearing [objevorání]” (21). Part of this secret, Patočka says, is the additional factor of memory. It’s not just that as we move about different phenomena come to show themselves to us, but that those previous moments of appearing are still with us, not as veridical representations of prior moments but as continuous elements influencing the structure of appearing as such. There is, then, for Patočka, a unity of the thing showing itself (its many aspects appearing under different lights) and a continuity of appearance now and appearance then. This is all present within the nature of showing, and this is Patočka’s main point: Experience has a structure within which manifestation happens, and this structure has dual aspects of unity and continuity. “In the end,” Patočka says, “it seems that manifesting forms a solid interconnected system” (23).

Patočka thus moves from phenomena (or appearances), to their presence and occlusion, to memory, to the structure of appearing, which includes these aspects of unity and continuity. We can call Patočka’s phenomenology a transcendental one insofar as he, like Husserl, rejects the idea that this structured, interconnected system is found within experience and is instead located prior to experience. Experience, in the last account, is experience of this structure of appearing, of things manifesting or showing themselves to us. This process is not something we do—something “in” us—it is rather what “we” operate within. The ground of our reflection about experience has this curved shape built into it: The nature of appearing occurs within the structure of how things come to appear at all. Patočka is not talking about things appearing for me or things appearing for you, but about appearing in itself (24), which necessarily conditions our own reflections about it.

The philosophical project Patočka has set out is now coming more fully into view. This isn’t a science of objects (as we might find in physics) nor a commitment to subjective inquiry but rather, as we’ve just seen, a mode of attention aimed at the nature of appearing itself. It is upon this ground—the ground of how things manifest at all within experience—where Patočka will make his link back to care of the soul. He puts it this way, “Care of the soul is fundamentally care that follows from the proximity of man to manifesting, to the phenomenon as such, to the manifesting world in its whole, that occurs within man, with man” (27). It is our proximity to the manifesting world, to the way things are given to us in experience, that makes appearing possible. Readers of phenomenology will recognize the language Patočka deploys here. The phenomena that populate our experience are coincident with our judgments and beliefs about things. Our recognition of things and events is a premise we enter into about our experience.

If we’re following Patočka’s line of thought, we are in effect attending to appearing.

My own thesis is this: Askēsis, which means spiritual exercise, works on the structure of appearing. It is a way of influencing the structure of presence and its mode of givenness through practices of attention (meditation, contemplation, prayer, art) and transformation (physical training, fasting, dialectics) to which askēsis broadly refers. Askēsis acts on appearing, is the most general way of expressing this thought. We can also read “care of the soul” broadly as a mode of askēsis, as a therapeutic regime, but also as an epistemological commitment. Patočka means care of the soul in both senses. When he says we are “beings to whom reality manifests itself” (32), I read this in the tripartite sense of an epistemological situation, an ontological reality, and a therapeutic (or moral) responsibility. In this way, Patočka wants to articulate a philosophy that is also truly metaphysical (33). In other words, he is making claims about the relation between phenomena and existence by showing that existence consists not only in things but also in the structure of appearing that lets things show themselves. “The world is not only the world that is, but also the world that shows itself” is how he phrases it (31).

In his closing moves, he makes the final comment that the human plays the double role of being one being among the beings of the world (and therefore similarly at the whim of the world’s contingency) and the being through which the world’s manner of appearing is disclosed. This is the truth of our situation, says Patočka, and awareness of our dual role places us in a state of distress. “Truth is damnation” (35) are his dour words. However, this truth, this existential distress, is not without able response. The program of training initiated in Greek philosophy is for Patočka the path of navigating the truth of things. (We do not need to limit ourselves to the Greeks. I only phrase it this way because Patočka sets up his lectures in dialogue with Greek philosophy.) He says, “This program presupposes a fundamental transformation within man” (36). This transformative program is at once the phenomenological project Patočka describes and the care of the soul that prepares the person for being the subject to whom things appear. What does care of the soul mean? It is for Patočka this attention to and concern with our proximity to appearing; it’s a sense of responsibility for being the location of the disclosure of being.

I said above my thesis is that askēsis (which includes care for the soul) acts on the structure of appearing, influencing its vividness and hidden detail, and I’ll close by saying that it does this work because it also forms the subject for whom appearing appears. I’ll put it another way. If as Patočka says phenomenology is “the teaching of the structure of manifesting as such” (38) then askēsis is the occult labor that makes this ground explicit and allows it to be taken up as the medium of the transformative program that is the philosophical way of life, the care of the soul that Patočka sees the Greek tradition as rooted in. To be more specific, askēsis takes advantage of the unity and continuity of our experience by leveraging repetition against memory and by crafting presence against absence (and vice versa), to afford a re-direction of the avenues by which future moments of appearing arrive in experience. The hidden secret of appearing is that experience lies on the far side of this repetitive preparation, a preparation we can call askēsis or care of the soul, and which makes seeing itself a practice, a practice or craft of attention.

Experience is an achievement of practice.

I’ll have to flesh out in greater detail at a later time these links with askēsis, but that’s the basic sketch of the relation between spiritual exercise and the nature of appearing, using some of Patočka’s vocabulary to help make the activity more explicit.